Last Thursday fourth through sixth graders worked on educational games on iPads and earned 10 grains of rice for each correct answer to be donated to the United Nations World Food Program thru Freerice.com. A grant from Rotary Club of Hilliard allowed SON Ministries to purchase iPads for administrative and now educational purposes. Thank you to volunteer Kate Carney for bringing this DREAM to life. 10,820 grains of rice were earned and donated – feeding 3 hungry people.

Join the children Serving Our Neighbor!

As we periodically welcome new faces to Kids Club, I am reminded that Kids Club is ever-evolving. It’s not just the new children who contribute to the changing atmosphere, but I can see change and growth in some of the children who have been with us for months now. I have noticed the children become more able to work as a team and to increasingly look out for the other children in Kids Club.

One specific example:  at the beginning of the year, there was a middle school boy who garnered a reputation as somewhat of a troublemaker. It seemed as though every other day a volunteer or intern would have to sit down with him and have a caring but firm discussion about behavior.

Over time, this boy’s behavior did start to improve. Eventually the other volunteers and I no longer had to speak with him, and I was content with this. Then… the boy’s behavior came to my attention once again….  but this time for positive reasons.

Recently a couple of brand-new immigrant children have come to Kids Club, and they speak almost no English. Without being asked, the same middle school boy stays close to the new children throughout the night to help translate for them. This is a happy surprise, I thought to myself. I didn’t really think about it much after that.

The next week there was a young boy in Kindergarten who was having a bad day and was hesitant to enter the gym for Kids Club. I tried to coax him into playing a game with me. No luck. Another experienced volunteer tried to convince the boy to come into the gym. Again, she had no success. I was doing another activity at this point and lost track of the situation. Later on, I saw the Kindergarten boy in the gym, happily playing with his friends. I commented that I was glad to see him in the gym at last, and asked who had finally been able to convince him to play. The answer? It was the same middle school boy who had helped translate for the new kids just the week before, again without being asked. 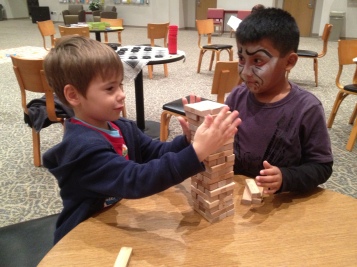 These are just a few examples of the many acts of kindness I have seen from the children at Kids Club recently. It seems as though Kids Club is at least partially responsible for helping increase teamwork and compassion. Please join us and see the magic happen for yourself!

At SON Ministries, we see the DIVINE in each person, each has a purpose and a voice.

We are excited to announce that we had another joy-filled Good Tidings Christmas Store this Christmas!

Together, side by side, we respectfully served 207 families and 617 children – 60 percent more families than in 2013!
Parents joyfully shopped for (at 10 percent of retail prices) and wrapped gifts while their children were cared for and even made Christmas crafts.

It was amazing to see so many individuals from the Hilliard community come together to serve children and families in need in our community.

We are excited to share with you an inspirational video from the Christmas Store:

At SON Ministries, we bring HOPE to children and families in need by connecting them to people, resources and a hand up.